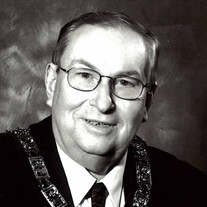 Norman C. Behnke, 80, of Fond du Lac, passed away peacefully at St. Agnes Hospital on Thursday, December 12, 2019. Norm was born in Fond du Lac on October 13, 1939, the son of Carl and Hazel (Toll) Behnke. On May 27, 1961, Norm married his high school sweetheart, Judie Gratton. Together they had two children, Carla A. and Curt G. In 1956, Norm joined the Navy Reserves. After graduation from L.P Goodrich High School in 1958, he went on active duty aboard the USS Valley Forge in Norfolk, Virginia. After discharge, he worked for Omar Bakery. In 1962, Norm went to work at Brenner Tank, in Fond du Lac, where he worked for 46 years. He was a project and maintenance manager, overseeing the company’s facility expansion. In this role, he traveled extensively overseas. After retirement from Brenner Tank, Norm worked as a self-employed consultant in the transport tank industry, and also as a sales rep for Herlache Tooling for 9 years. Norm was passionate about service to the Fond du Lac community. He was an active member of Church of Peace UCC for 76 years, where he served in many leadership roles. He is a current member of Pilgrim United Church of Christ. He also served on the boards of directors of Fond du Lac Music Parents and Friends of Taylor Park. He was an officer and former president of Lakeside Evening Kiwanis, participating for many years in The World’s Largest Fish Fry at Walleye Weekend. He was awarded the Kiwanis George Hixson Fellowship. One of Norm’s greatest joys was becoming a member of the B.P.O. Elks in 1989. He served twice as Exalted Ruler of Lodge #57 in Fond du Lac, in 1997 and 2002. At Lodge #57, he received Elk of the Year and Officer of the Year awards. He was Elks Scholarship Chairman for Fond du Lac County for 27 years. He is currently a member and trustee of Oshkosh Lodge #292. He served as a District Vice President, and went on to become President of the Wisconsin Elks Association in 2003-04. He and Judie attended Elks Grand Lodge conventions across the U.S., and he was a Grand Lodge Activities Committeeman for four years. Norm loved woodworking, carpentry, and working in his yard. He was a Wisconsin Badgers fan, and was a shareholder of the Green Bay Packers. He enjoyed helping others and shared his time, talents, and stories with many, many people over the years. Norm is survived by his beloved wife, Judie; his son, Curt, of Chicago; his brother, Donald (Lee) of Fond du Lac; several nieces and nephews; and his dear little great-nieces Erin, Elsa and Eve. Preceding him in death were his parents; his daughter, Carla Ann (2018); several nieces, nephews, brothers-in-law and sisters-in-law. The family extends a special thank you to Pastor Ted Drewsen, Chaplain Dana Caldwell, Dr. Gehrke, Nurses Amy and Amy, Kendra, Lynda, Don, Kristin, Nicole and Morgan. VISITATION: Friends may call on Sunday, December 15, 2019, from 3:00 PM until 8:00 PM, there will be a brief Elks Lodge of Sorrow Service at 7:00 PM. All will take place at Kurki-Mach Funeral Chapel & Crematory, 31 East Division Street, Fond du Lac. FUNERAL: Funeral services will be held on Monday, December 16, 2019, at 11:00 AM, at Pilgrim United Church of Christ, 535 Stow Street, Fond du Lac, preceded by visitation from 9:00 AM until the time of service. Memorials may be directed to: Oshkosh Elks Lodge #292 Improvement Fund or Pilgrim United Church of Christ. Kurki-Mach Funeral Chapel & Crematory is serving the family, www.kurkimachfuneralchapel.com. 920-921-4420

The family of Norman C. Behnke created this Life Tributes page to make it easy to share your memories.

Send flowers to the Behnke family.