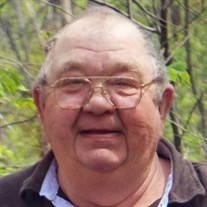 Orland E. Stahmann, wise-cracking father and grandfather, hard worker and all around handyman passed away peacefully at home on Monday, February 18th, 2019. He was born September 15, 1944, to Ernst and Mildred Stahmann. He married Betty Lefeber May 15, 1965. He celebrated his 50th wedding anniversary with her one week prior to her passing in 2015. Orly attended a one-room school house with grades 1 through 8. He shared many stories of being a young man that worked hard and played hard. Some of his many jobs included bailing hay for Kenny, earned $1.25 at the canning factory in Rosendale. He also worked at a sewer construction company, gas station, at Eddie Voskel’s, and at a junk yard. He started at Hansen’s Refrigeration (now known as Hansen Refrigeration Machinery) in 1966 on a handshake. Between Fred Hansen and Betty he was whipped into shape, often working several jobs to support his family. Worry not, Orly had time to enjoy trap shooting, bowling, snowmobiling, fishing and hunting. It’s rumored that Wednesday mornings were a bit rough after bowling Tuesday night. He also enjoyed making horseradish and going to auctions. Throughout his life, Orland enjoyed trap shooting at every gun club around, including Forest, Van Dyne, Eden, East Shore, Wescott and Berlin. Following his 3rd retirement from Hansen’s (working 49 years there), Orland could frequently be found sitting in his garage on Division Street (where he lived for 49 years) with any number of friends and neighbors. In cooler temperatures, Orly enjoyed driving two hours for a 50 pound bag of potatoes or perhaps a block of cheese. Orly is survived by two of his children, Sandy Ritchie and Allen (Lisa) Stahmann, four grandchildren, Cassandra (Eric) Vanevenhoven, Erin (Steven) Kyler, Josie Stahmann and Jack Stahmann, and three great grandchildren, Logan and Liam Kyler and Harper Vanevenhoven as well as sister-in-law Marian Stahmann. He is preceded in death by his parents, his wife Betty, his son, Greg Stahmann; two infant children, his brothers: Marlow and Harold Stahmann; and his sister, Sylvia Nygard. VISITATION: Friends may call on Thursday, February 21, 2019, from 3:00 – 7:00 p.m. at Kurki-Mach Funeral Chapel, 31 East Division Street, Fond du Lac. A brief family service will follow. In lieu of flowers, please donate to the Fond du Lac Humane Society, where he adopted his sassy sidekick Willy in 2015.

Orland E. Stahmann, wise-cracking father and grandfather, hard worker and all around handyman passed away peacefully at home on Monday, February 18th, 2019. He was born September 15, 1944, to Ernst and Mildred Stahmann. He married Betty Lefeber... View Obituary & Service Information

The family of Orland "Orly" E. Stahmann created this Life Tributes page to make it easy to share your memories.

Send flowers to the Stahmann family.