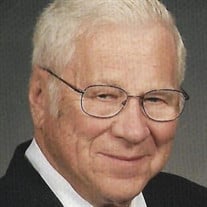 Paul S. Bertuleit, loving husband of Diane (Finstad) Bertuleit, was peacefully called home by his Lord and Savior on November 3, 2021 at age 97. Paul was born on August 20, 1924 in Portland, Oregon, the son of Henry W. Bertuleit and Elsa Ritter Bertuleit. Following his education in the Portland school system Paul served the United States of America in the Navy during World War II as an Electrician's Mate on the USS Tomahawk. His decorations include the Asiatic-Pacific Campaign Medal with 4 bronze stars, the American Area Campaign Medal, the Philippines Liberation Medal with one bronze star, and the World War II Victory Medal. After his military service, Paul attended Portland State University. In January 1947 he married Virginia Kleinhammer of Fond du Lac, who was in Portland serving the war effort in the Veterans Administration. In 1948, Paul and Virginia moved to Fond du Lac, WI, where they were blessed with two children, Linda and Dan, who gave them many opportunities to share a wonderful and loving life. They also contributed to their community in many ways of service for more than 50 years. Paul was employed at JF Ahern Co. and Ahern-Gross in the mechanical contracting and plumbing industry where he held consulting, management, and executive positions. He was well known in Wisconsin for forming creative and practical solutions serving customers. Virginia succumbed to cancer in 1998. Paul met and then married Diane Finstad of Fond du Lac on August 21, 2004, which was a joyous blessing. Diane had also lost her husband Mike to cancer. During their retirement, Paul and Diane enjoyed their devoted companionship as a loving couple, travelling together and spending time at their cabin up north as much as possible. They especially enjoyed getting together with their friends and their extended family. Paul and Diane have been active members of Hope Lutheran Church in Fond du Lac for many years. Together, they served several charitable and social organizations. Dad was deeply faithful and lived each day giving God's love to every person he met. He had a great love for life and joyfully lived each day in gratitude for the blessings that were all around him! He always saw the silver lining behind every challenge that came along and did his best to share that love and happiness with everyone. He loved to tell jokes, and always had a new one to share with others, which never failed to bring a laugh, or a groan from his kids and grandkids when it was a corny joke! With humor, he was able to let God's love shine through and put a smile on the face of all those he met. Dad was constantly singing happy songs and uplifting hymns and had a beautiful and rich deep bass voice, which touched the hearts of all who heard him sing. He really loved singing the old hymns in church during the worship services. As a loving husband, devoted father and friend, Paul will be sorely missed. He is survived by his wife Diane (Finstad) Bertuleit of Fond du Lac and her sister Karen Britten, who provided care to Paul during his last days; daughter Linda Higgins and her husband Bill of Baraboo, WI; son Dan Bertuleit and his wife Laurel of Star, ID; his five grandchildren and their spouses and seven great grandchildren. With Diane, the extended family includes her son Fred Finstad and his friend Angie Williquette, Diane's son Dan Finstad and his wife Tanya, and five grandchildren, all in the Fond-du Lac area. Paul was preceded in death by his first wife Virginia, his parents, his brother and wife Dan and Miriam Bertuleit, his sister and husband Eleanor and John Baird, his brother-in-law Gordon Kleinhammer, and Diane's son, Ted Finstad. Due to difficulties of the Covid pandemic, Paul's family is planning his memorial service and celebration of his life to take place in the spring of 2022. An announcement of the time and place will be made later. Charitable donations in Paul's memory may be directed to Hope Lutheran Church or The Salvation Army in Fond du Lac. Paul would wish to thank you for the love, support, and friendship that you have given to him through his long and full life.

Paul S. Bertuleit, loving husband of Diane (Finstad) Bertuleit, was peacefully called home by his Lord and Savior on November 3, 2021 at age 97. Paul was born on August 20, 1924 in Portland, Oregon, the son of Henry W. Bertuleit and Elsa Ritter... View Obituary & Service Information

The family of Paul S. Bertuleit created this Life Tributes page to make it easy to share your memories.

Send flowers to the Bertuleit family.