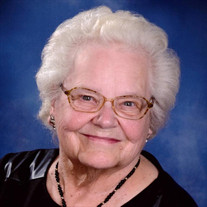 Pearl A. Everett, 91, of Oshkosh, passed away on Thursday, February 25, 2021, at Hospice Home of Hope in Fond du Lac. She was born on June 10, 1929, in Oshkosh, the daughter of Richard and Helene Raddatz Potratz. She was a graduate of Oshkosh High School, Class of 1947. On July 29, 1950, she married Eugene C. Everett at St. John’s Lutheran Church in Nekimi. He preceded her in death on December 17, 1980. Pearl worked as a waitress and cook in various restaurants. She was manager of Pearl’s Restaurant in the Oshkosh Park Plaza, and worked at La Sure’s Catering in Oshkosh. She later worked as a food service manager at Parkview Nursing Home in Ripon. While working in restaurants, Pearl continued to work on the family farm. Pearl was an active and longtime member of Grace Lutheran Church in Omro. She would go to “Red School” luncheons with her classmates. She enjoyed cooking, gardening and farming. Pearl was a very generous and giving soul, and will be sorely missed by many. She is survived by her daughters: Kathryn (Timothy) Liner of Van Dyne and Linda (Ronald) Hammer of Fond du Lac; her grandchildren: Jeffery Liner, Daniel Liner, Michael (Angelice) Liner, Kristin (Eleanor Monroe) Hammer and Kevin (Michelle Gatz) Hammer; her great-grandchildren: Patrick, Trevor, Thor, Leif and Jacob; her brother Marvin (Erma) Potratz of Van Dyne and her sister Alice (Carl) Berger of Milwaukee. She is preceded in death by her parents, her husband and eight brothers and sisters. SERVICES: There will be no formal visitation, church will be open at 12:30PM on Wednesday, March 3, 2021 at Grace Lutheran Church, 720 Jackson Avenue, Omro, WI 54963. Masks and social distancing are required. Funeral Services will be held at 1:00 PM, with Rev. Mark Wenzel officiating. Private burial services will be held at St. John’s Cemetery. In lieu of flowers, memorials in Pearl’s name may be directed to Grace Lutheran Church or Hospice Home of Hope.

Pearl A. Everett, 91, of Oshkosh, passed away on Thursday, February 25, 2021, at Hospice Home of Hope in Fond du Lac. She was born on June 10, 1929, in Oshkosh, the daughter of Richard and Helene Raddatz Potratz. She was a graduate of Oshkosh... View Obituary & Service Information

The family of Pearl A. Everett created this Life Tributes page to make it easy to share your memories.

Pearl A. Everett, 91, of Oshkosh, passed away on Thursday, February...

Send flowers to the Everett family.