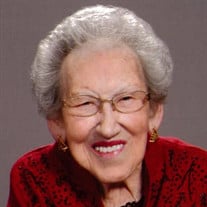 Phyllis Mae Jahns, rural Fond du Lac, was called home to heaven on Tuesday, September 14, 2021. Phyllis was baptized into the Lord's kingdom on August 8, 1931, after having been born in Withee, Wis., on January 15 of that year. She was the sixth of eight children born to Engman and Mabel (Smith) Gilbertson. Phyllis graduated from Goodrich High School in Fond du Lac in 1949, worked for a time at Infant Socks, and was married to Melvin "Butch" Jahns on March 31, 1951, at St. Paul's Lutheran Church in North Fond du Lac. Their marriage was blessed with four children: Patricia Jahns of rural Fond du Lac, Joan Toetz (David) of Eldorado, David (Jeanne) Jahns of rural Van Dyne, and Thomas (Joyce) Jahns of rural Fond du Lac. Phyllis was a long-time member of St. Luke's Lutheran Church in Oakfield and a member of the Ladies' Aid and the choir, followed by membership at St. Peter's Lutheran Church in Eldorado. She was also a part of the Ladies' Aid there and was the "Sunshine Lady", sending out greeting cards as needed. Phyllis' work outside the home was as a cleaning lady for many years, a job which she enjoyed very much; and she remained friends with some of her employers until the present time, after her retirement at the age of 80. She worked so hard for many years in order that she could provide a Christian education for her children, which they all appreciate as a precious blessing. For many years, Phyllis baked two pies every Saturday morning, probably before most people were even out of bed (Butch loved pie!). In addition to her children, Phyllis is survived by four beloved grandchildren, seven great­grandchildren, one great-great grandson; and one sister, Janet White of Fond du Lac. Also surviving are sisters-in-law and brothers-in-law Carol Gilbertson, Ruth Feavel, Alice Bazeley, Norman Jahns (Joan), Don Jahns (Judy), and Ron Jahns (Joanne); in addition to several cousins and many nieces, nephews, and friends. She was preceded in death by her parents, her husband Melvin "Butch" Jahns, on January 15, 2002; her in-laws Emil and Olga Jahns, siblings: Elaine Hallwachs, Howard Gilbertson, Lemoine Marcoe, Harold Gilbertson, Vivian Gilbertson (in childhood), and Marjorie Gilbertson; and brothers-in-law and sisters-in-law Orlo Jahns (and Marie), Edna Lehner (and Harold), Elda Pinch (and Gordon), Ervin Jahns (and Merna Bell), Carol Reinhold (and Glen), Shirley Jahns, Wally Hallwachs, Jim Marcoe, and Jerry White. VISITATION: Friends may call from 1:00 – 3:00 PM, on Sunday, September 19, 2021, at St. Peter’s Lutheran Church, N7987 Town Hall Road, Eldorado, WI 54932. SERVICE: Funeral Services will be held at 3:00 PM, on Sunday, September 19, 2021, at St. Peter’s Lutheran Church, with Pastor Zachary Semmann officiating. Phyllis' body will be entombed next to her beloved Butch at Ledgeview Memorial Park in Fond du Lac, where a committal service will be held on Monday, September 20, 2021, at 10:00 AM. Anyone who wishes to attend may do so. In lieu of flowers, memorials are requested to St. Peter's Lutheran Church, Eldorado, Eldorado First Responders or Winnebago Lutheran Academy, Fond du Lac. The family wishes to offer special thanks to Pastor Semmann, as well as to the SSM Hospice workers who helped to make Phyllis' last few days more comfortable.

Phyllis Mae Jahns, rural Fond du Lac, was called home to heaven on Tuesday, September 14, 2021. Phyllis was baptized into the Lord's kingdom on August 8, 1931, after having been born in Withee, Wis., on January 15 of that year. She was the sixth... View Obituary & Service Information

The family of Phyllis M. Jahns created this Life Tributes page to make it easy to share your memories.

Send flowers to the Jahns family.