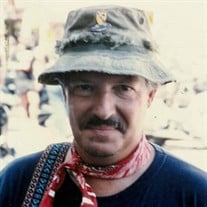 Randall Phillips LeFevre, age 71, passed away on July 18th after a brief struggle with cancer. He was born in Fond du Lac on December 10, 1948, of Frank H. and Ethel (June Kaiser-Neumann) LeFevre. He married Christine Olig on April 2, 1977 and they were blessed with a daughter, Danielle. Randy graduated from Irving Crown High School, Carpentersville, IL and received his teaching degree from UW-Oshkosh in 1981. He taught at Consolidated Parochial Elementary School (CPES) in Johnsburg from 1981 to 1988. After moving to Bakersfield, CA he taught high school social studies in both Maricopa and Tehachapi. Randy retired in 2005 from Bob's Harley Davidson as a service writer. Randy served with the US Army Echo Company 2/5 Calvary Division in Vietnam in 1971. Upon his discharge he joined the US Army Reserve and Wisconsin National Guard. He was a member of the American Legion, VFW and DAV. Randy's pleasures were visiting with friends and neighbors in his driveway, driving his Challenger and Caribbean vacations with Chris, friends and family. Randy is survived by his wife, Chris, daughter Dani, son-in-law Patrick McGovern, his precious granddaughter Molly, sisters: Nancy (Roger) Petrie and Linda Manning (David Moneysmith); his mother-in-law Rosemary Olig, sisters-in-law: Maribeth (Ed) Blake, Cathy (Roger) Woelfel and Karen LeFevre; brothers-in-law: Steve (Mary) Olig, Jeff (Julie) Olig and Burney Wylie. He was preceded in death by his parents, step-parents Doris LeFevre and Gerhardt Neumann, father-in-law Conrad Olig, sister Michele Wylie and brother Lance LeFevre. VISITATION: Friends may call on Thursday, July 23, 2020, from 2:00 – 4:00 PM at Kurki Funeral Chapel & Crematory, 31 East Division Street, Fond du Lac. SERVICE: Private family services will take place on Thursday, July 23, 2020 at Kurki Funeral Chapel & Crematory. Chris and Dani would like to express their sincere thanks and gratitude to the following: Dr. Bhattacharjee and the neurosurgery team, Dr. Troicki and the radiation team, the nursing and family support staffs at Agnesian 5West, Agnesian Cancer Center and Harbor Haven. The guidance and compassion given to us during this time by all is beyond measure. Memorials in Randy’s name can be submitted to: Agnesian Healthcare Foundation Carol Hyland Caring for You Fund.

Randall Phillips LeFevre, age 71, passed away on July 18th after a brief struggle with cancer. He was born in Fond du Lac on December 10, 1948, of Frank H. and Ethel (June Kaiser-Neumann) LeFevre. He married Christine Olig on April 2, 1977 and... View Obituary & Service Information

The family of Randall P. LeFevre created this Life Tributes page to make it easy to share your memories.

Randall Phillips LeFevre, age 71, passed away on July 18th after...

Send flowers to the LeFevre family.