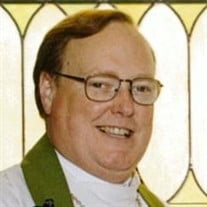 Rev. John T. Steinbrecher, 72, of Fond du Lac, went to rest with his Lord and Savior on Friday, October 18, 2019 at Aurora Medical Center, in Oshkosh, WI. John was born to August and Loretta Reese Steinbrecher in Chicago, IL on December 21, 1946. John grew up in Oshkosh, graduating with the Class of 1965 from Oshkosh High School. He attended UW Oshkosh, graduating in December 1969. On July 25, 1970, he married Barbara Beck Steinbrecher. In August of 1970, they moved to Dubuque, Iowa, where John was a student at Wartburg Theological Seminary, graduating in December 1973 with a Masters of Divinity Degree. He was ordained in January 1974, at First English Lutheran Church in Oshkosh. He served parishes in the cities of New Douglas, Joliet and Chicago all of Illinois. John served as chaplain at the Fond du Lac Lutheran Home and served the Holden and West Holden parishes in Wautoma. He was a member of Immanuel-Trinity Lutheran Church. He is survived by his wife, Barbara, his children: Kristin (Jonathan) Sherman of Palatine, IL, Joel Steinbrecher of Skokie, IL, Jennifer Steinbrecher of Fond du Lac, Megan (Ronald Jr.) Kellar of North Fond du Lac, and Michael (friend Olivia Downing) Steinbrecher of Fond du Lac; his grandchildren: Eli and Ian Sherman and Nicholas, Grady and Lauren Kellar, his sister Sara Mitchel of Columbus, OH, and his nieces and nephews. He is preceded in death by his parents, his brothers August “Fred” Steinbrecher and Rev. James Steinbrecher, his aunt and uncle Jessie and Frank Fell. VISITATION: Friends may call on Thursday, October 24, 2019, from 12:30-2:30 p.m. at Immanuel-Trinity Lutheran Church, 20 Wisconsin American Drive, Fond du Lac. FUNERAL: Memorial services will be held on Thursday, October 24, 2019, at 2:30 p.m. at Immanuel-Trinity Lutheran Church, with Rev. Tom Meyer officiating. Inurnment will be at Lakeview Memorial Park, Oshkosh, WI. Cremation has taken place. Memorials in John’s name will be shared with Immanuel-Trinity Lutheran Church and the Wartburg Seminary Scholarship fund to assist students entering the ministry. The family thanks the Aurora Hospital staff on 2 West, ICU, and Dr. Soni for their exceptional care and kindness to John and family. Kurki-Mach Funeral Chapel & Crematory is serving the family, www.kurkimachfuneralchapel.com. 920-921-4420

The family of Rev. John T. Steinbrecher created this Life Tributes page to make it easy to share your memories.

Send flowers to the Steinbrecher family.