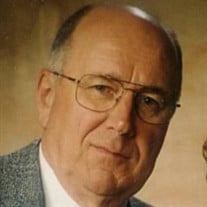 Robert “Bob” J. Jackson Jr., 85, of North Fond du Lac, passed away on Thursday, February 25, 2021 at Edenbrook. He was born on April 24, 1935, in Fond du Lac, the son of Robert J. and Gladys Kobs Jackson. He was baptized and confirmed at St. Peter’s Ev. Lutheran Church in Fond du Lac. He was a graduate of Winnebago Lutheran Academy, Class of 1953. He attended Northwestern College for two years. Bob joined the United States Army Reserves, serving in the 432nd Civil Affairs Company at Fort Leonard Wood, MO. His discharge rank was Sargent 1st Class. On October 11, 1958, he married Carol E. Soda, at St. John’s Lutheran in Princeton, WI. Bob was in the insurance business for 40 years. Before that he worked at the Soo Lines Railroad, where he learned the electrical trade. He served on the School Board for many years at St. Peter’s Lutheran School and on the Winnebago Lutheran Academy Plenary Board. He was a Fond du Lac Noon Optimist member for many years. In his free time, Bob enjoyed bowling, and bowled a 300 game. In is later years, he took up golf and really enjoyed that. Bob and Carol had the opportunity to visit Canada, Alaska, Switzerland, Austria, Germany and Ireland. He is survived by his loving wife of 62 years Carol Jackson of North Fond du Lac, his children: David (Sally) Jackson of Fond du Lac, Diane (Patrick) Gossman of Fond du Lac and Daniel Jackson of Phillips, WI; nine grandchildren, 11 great-grandchildren, his brother Gary (Addie) Jackson of Fond du Lac. He is preceded in death by his parents, his sister Donna Kowalski, of Arizona, on January 11, 2021, and aunts, uncles, two nieces, nephew and friends. Private family services will be held on Monday, March 1, 2021 at Kurki Funeral Chapel & Crematory, with Rev. James Borgwardt officiating. Burial to take place at Zion Cemetery in Van Dyne. In lieu of flowers, memorials may be directed to Redeemer Lutheran Church, Winnebago Lutheran Academy or Agnesian Hospice. Kurki Funeral Chapel & Crematory is serving the family, www.kurkifuneralchapel.com. 920-921-4420

The family of Robert "Bob" J. Jackson Jr. created this Life Tributes page to make it easy to share your memories.

Send flowers to the Jackson family.