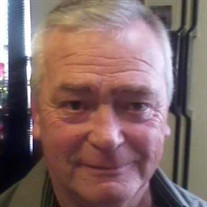 Robert “Bud” Edward Shaw, Jr., 75, of North Fond du Lac, passed away on Friday, February 25, 2022, at St. Agnes Hospital. He was born on January 27, 1947, son of the late Robert and Minnie (Schnacker) Shaw in Fond du Lac where he lived and was raised on Chestnut Street, and he was proud of being one of those “west-side” boys. He attended grade school, junior and senior high school in Fond du Lac and was a member of the 1965 graduating class. In 1965, Bud joined the US Army and he served in Vietnam until his discharge in 1968. He was proud to serve his country and never left home without his Vietnam Veteran hat on. Bud worked at Rueping Leather Company until they closed and then worked for Park Cheese, from which he retired after 30 years. Bud’s battle with alcohol addiction ended in 1979, after a successful treatment program. He was extremely proud of his 43 years of sobriety. Bud started an AA program/meeting group for younger adults and teens, at the old VFW Club on Forest Avenue in Fond du Lac. Bud was a sponsor for many people and was instrumental in helping them achieve their goals to remain addiction free. Bud married Janet Reehl and from that union were born three children, Steve (Fiona Shaw of Lebanon, Ohio, Christine Lefeber of North Fond du Lac and Tracy (Rob) Sullivan of Colorado Springs, Colorado. In 1977, Bud married Bonnie Mattefs (Braun), from which he inherited the dreaded “red-headed” stepson, Rick Braun. Bud and Bonnie just celebrated 45 years of marriage this past January. Bud is the proud grandpa of Dylan and Alec Lefeber, Erin Eck and Kori Shaw and Benjamin and Kaitlin Sullivan and Jace and Alyssa Braun. He is also a great-grandpa to Emberlynn, Nicholas, Paityn and Jaime Eck. Bud is further survived by his siblings, Russ (Lynn) Shaw of Appleton, Iona (Roman) Gieryn of West Bend, Janet Scott of Oklahoma and Kelly Shaw of Fond du Lac; a sister-in-law Susan (Peeler) Shaw of North Carolina; a brother-in-law, Jerry (Judi) Mattefs, sisters-in-law JoJo (Scott) Teichmiller and Kathy Mattefs, many nieces, nephews, other relatives and friends. He was preceded in death by his parents and his younger brother Doug Shaw and brother-in-law Ron Mattefs. Before his health declined, Bud enjoyed traveling throughout the United States, by car. He loved his “up-north” place in Athelstane, WI. He enjoyed spending his time on his pond, swimming, fishing, paddle-boating and playing ice hockey with his family/friends. He coached little league for many years. He loved helping out his neighbors and often times would jump on his lawn mower and cut all their lawns and/or start up his snow blower and do all their snow removal, often times leaving in the morning and not coming back till supper, once he knew they were all take care of. He had a heart of gold and fought many medical issues, over the years, defying the odds, but just couldn’t fight this last one. He enjoyed his breakfast and group of guys at Faros for many years. He was able to get one last fishing excursion in and had the best time of his life. VISITATION: The family will greet friends from 2:00 - 6:00 PM on Friday, March 4, 2022, at Kurki Funeral Chapel & Crematory, 31 East Division Street, Fond du Lac. SERVICE: Memorial services will be held at 6:00 PM on Friday, March 4, 2022, at Kurki Funeral Chapel & Crematory. Military services will be conducted at 2:45 PM by Trier-Puddy American Legion Post #75 at the Funeral Chapel.

The family of Robert E Shaw Jr. created this Life Tributes page to make it easy to share your memories.

Send flowers to the Shaw family.