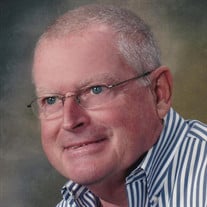 Robert (Bob) Eugene Wegner, 79, passed peacefully to his Heavenly home, on Sunday, September 20, 2020. Robert was born in Fond du Lac, WI on May 3, 1941, to Roland & Marion (Kemnitz) Wegner. He was dedicated to God through Holy Baptism on May 23, 1941, at St. Peter’s Evangelical Lutheran Church in Eldorado, WI, where he was also confirmed on April 11, 1954. On May 28, 1959, Robert was 1 of 41 students to graduate from Rosendale High School, where he played clarinet in the band & served as class Secretary. He received his B.S. Degree from Wisconsin State College in Oshkosh on June 8, 1963. Robert went on to become a teacher & eventually Vice Principal. He retired on June 9, 2000, after 37 years serving for one year in California & 36 years in the Milwaukee area school districts, during which time he was loved & respected by students & staff. Robert was preceded in death by his father Roland in 1984, his only sibling Edward in 1996, his mother Marion in 2005, & his great-niece Madeline in 2018. He is survived by his loving niece & God-daughter Lisa (Joe) Krohn of Wimberley, TX, Lisa’s sons Garrett & Austin, his nephew Eric (Cindy) Wegner of Oconomowoc, WI & Eric’s children Marlena, Maxwell & Manning. Many sincere thanks go out to the caring staff at Sage Meadows Memory Care in Fond du Lac, where Bob had been a resident since June 2012. Appreciation & thanks also go out to Generations Hospice. Due to COVID-19, Bob received a private Christian graveside service and was laid to rest next to his parents at the Rosendale Cemetery. In lieu of flowers or plants, please send memorial donations to benefit the school at Bob’s church, which may be mailed to: St. Paul Ev. Lutheran Church, Designated for Christian Education 1010 Adams St., North Fond du Lac, WI 54937.

Robert (Bob) Eugene Wegner, 79, passed peacefully to his Heavenly home, on Sunday, September 20, 2020. Robert was born in Fond du Lac, WI on May 3, 1941, to Roland & Marion (Kemnitz) Wegner. He was dedicated to God through Holy Baptism on May... View Obituary & Service Information

The family of Robert E. Wegner created this Life Tributes page to make it easy to share your memories.

Send flowers to the Wegner family.