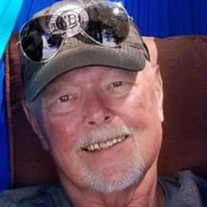 He was born into the world on August 4th, 1950 and joined his parents Lester and Viola Fox Bohlman in Eternal Glory on March 18th, 2021. He was blessed in marriage to Mary Rose Fisher on March 27th, 1971. He is survived by his loving wife, Mary, his two sons Christopher and Michael, his siblings Linda Floyd, John Bohlman, Nancy Fox, and Cher Bohlman and his Mother-in-Law, Beverly Fisher. This is not going to be a typical obituary which lists all of Ron's earthly endeavors and accomplishments. That is not what his life was truly about. Rather this will be a testimony to how God has used Ron to forever alter the lives of so many to eternal heavenly effect. Then God said, "Let there be light," and there was light. And God saw that the light was good. Then He separated the light from the darkness. Genesis 1:3-4 God said let there be light in Ron's life on April 27th, 1994, when he had an ethereal vision of hell while suffering a heart attack. His eyes were opened to the truth of the Gospel of Jesus Christ and he was separated from the darkness from that day forth. He committed his life to the Lord and the work of spreading the message of Christ's love to everyone around him. This massive spiritual breakthrough occurred after nearly two decades of diligent prayer by Mary and the many Christian brothers and sisters. God is Faithful! Ron was consumed with a passion for evangelism and was not ashamed of the Gospel but would boldly proclaim the name of Jesus wherever he went. On a mission’s trip to the Dominican Republic, he walked door to door handing out bibles and giving his testimony so that many received Christ. While on vacation in Ixtapa, Mexico, he befriended a man named Daniel on the beach and witnessed to him. Daniel accepted Christ and has remained a lifelong friend. A man named Phil, who met Ron shortly after becoming sober, was so influenced by Ron's testimony that he was later ordained, spent 5 years as a missionary and now is a part time pastor at a shelter for homeless men. Ron also loved the many veterans that he drove to their doctor’s appointments and would often share his heart and life story with them. There are so many wonderful stories of how the Lord has used Ron for His Glory, that, in truth, only God knows how many people he touched throughout his life. Anyone who knew Ron could tell you that he had a excellent sense of humor and really enjoyed laughing with other people. Many times, he would use this gift to disarm those who had built up defenses to engaging on a spiritual level. He loved to sing praise and worship and was a worship leader for one of the teams at Spirit of Life Church. Many good times of Christian fellowship occurred at Ron and Mary's home from having pool parties or wacky games in the basement to (of course) karaoke. Some remember him diving for the ball to win a game of backyard volleyball between the old and wise and the young whippersnappers. But in all these things, the true purpose was to bring others closer to God. Ron loved motorcycles. He rode his Harley everywhere to take in the beauty of God's creation unencumbered by the visibility detriments of a safer vehicle. This led him to start a motorcycle ministry called the Resurrection riders. He was the lead rider for the annual resurrection ride many years in a row, bringing in riders from Oshkosh and Appleton to ride a scenic circuit throughout the state of Wisconsin. Again, the Lord used this ministry to touch the lives of many who were in recovery from addiction or other had other damage from bad choices they had made previously in their lives. He will wipe away every tear from their eyes, and there will be no more death or sorrow or crying or pain. All these things are gone forever. Revelation 21:4 In June of 2018, Ron suffered a sudden cardiac arrest in his driveway and was kept alive by the vigorous CPR efforts of Mary while awaiting the arrival of emergency personnel. He survived this only to find out that he had advanced lung and esophageal cancer. Even through the sickness he led worship at church and continued sending out messages on the prayer chain email list until shortly before his passing. He was so grateful that God had granted him an additional 1000 days to spend with those that he loved. So you have sorrow now, but I will see you again; then you will rejoice, and no one can rob you of that joy. John 16:22 We as his family, mourn his passing from this life because of all that he was to us in body and spirit: devoted husband, loving father, and doting Grandpa as well as friends to so very many people. Even in our sorrow, we rejoice knowing that the Lord has welcomed his good and faithful servant into the glorious richness of his presence forever and ever. We who believe, look forward to meeting him again someday with our incorruptible bodies on the streets of gold in Heaven! We would like to thank the doctors and nurses at the Cancer Center and Hospice Hope for their love and compassion in taking care of Ron. Visitation- The family will receive friends and relatives from 12:00 - 3:00 PM on Saturday, April 10, 2021 at Spirit of Life Church, 240 N. National Avenue, Fond du Lac. SERVICE: Memorial services will be held at 3:00 PM on Saturday, April 10, 2021 at Spirit of Life Church. There are two dates on every tombstone. There is a birth date and there is a date of death, with every human being guaranteed those two dates. But it is the little dash that lies between those two numbers that defines our lives. So, make your dash count. Live----Really Live.

He was born into the world on August 4th, 1950 and joined his parents Lester and Viola Fox Bohlman in Eternal Glory on March 18th, 2021. He was blessed in marriage to Mary Rose Fisher on March 27th, 1971. He is survived by his loving wife, Mary,... View Obituary & Service Information

The family of Ron J. Bohlman created this Life Tributes page to make it easy to share your memories.

Send flowers to the Bohlman family.