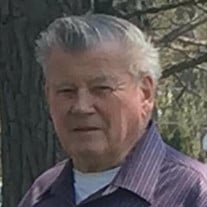 Ronald “Ron” D. Milton One of the best men in the world passed away on April 20, 2019. He was surrounded by his beloved family with his wife holding one hand and his sister holding the other. Ron was born on May 29, 1936 to Ashley and Pearl Milton. He graduated from Lincoln High School in Manitowoc. He was a man of accomplishments. He joined the Marine Corps and proudly served his country. Once he returned to civilian life, he met the love of his life, Charlotte Stedl and married her July 8, 1961. He continued his education and earned a bachelor’s degree at UW Stevens Point, a master’s degree at University Northern Michigan and a Specialist degree at UW Milwaukee. He was employed at the Rosendale Brandon School District for 40 years. He started as a teacher, advanced to Elementary and Middle School principal and eventually took the role of District Superintendent. Ron cared about all people and he was a man that touched many lives. He had an extraordinary sense of humor and was a master practical joker. He lived his life true to himself. Integrity was everything to him and everything he did reflected this. Ron loved hunting and the outdoors. One of his true passions was raising beagles and competing in field trials with them. He had many dogs accomplish Field Champion through the years. He was active in the Marine Corps League and enjoyed spending time with his comrades and their Tuesday Marine Corps. breakfast at Faro’s. He was also a charter member of the Rosendale Lions and a member of the United Church of Christ of Rosendale. He had a great love for his Rottweiler dog, Max. Above all, Ron was a family man. He was an amazing and supportive husband and father, grandfather and great grandfather and brother. He always kept a smile on everyone’s face and could come up with the funniest stuff. He was a quiet man, he was a great listener and very wise. We will profoundly miss talking with him and getting his advice on all matters. Ron is survived by his wife Charlotte, his children: Kelly (Bill) Stelsel, Kathie (Charles) Sutton and Tom (Connie) Milton; his grandchildren: Cody Schraa, William Stelsel, Shae (Dustin) Salinas, Cheyenne (Erik) Olson, Lyndsey Baumann, Luke Baumann, Madeline Milton, Ben Milton, Jessica (Kevin) Boon, Brett Wilke and Justin Wilke. His great grandchildern, Oliver, Lili, Silvia and Grady, his sister, Janet Nickel of Fargo, ND, brother in laws: Walter Stedl, William (Irene) Stedl and Jack Kotche. He had many nieces and nephews that he loved who loved him back. He is preceded in death by his parents, his mother and father in law, Walter and Delores Stedl and brother and sister in laws: Harvey and Carolyn Maurer, Judy Kotche, Curt Nickel and James Stedl. VISITATION: Friends may call on Thursday, April 25, 2019, from 2:00 – 6:00 p.m. at Kurki-Mach Funeral Chapel, 31 East Division Street, Fond du Lac. FUNERAL: Funeral services will be held on Thursday, April 25, 2019, at 6:00 p.m. at Kurki-Mach Funeral Chapel, with Rev. Wesley Wassell officiating. Cremation will follow the service. Inurnment will be in Rosendale Cemetery at a later date. Kurki-Mach Funeral Chapel & Crematory is serving the family, www.kurkimachfuneralchapel.com. 920-921-4420

The family of Ronald "Ron" D. Milton created this Life Tributes page to make it easy to share your memories.

Ronald “Ron” D. Milton
One of the best men in the world passed...

Send flowers to the Milton family.