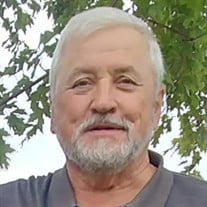 Rueben W. Ruch Jr. passed away at his home on April 30, 2020. He was born at St Agnes Hospital on March 17, 1949 to Rueben Sr. and Marjorie (Krueger) Ruch. He was baptized at St Peter’s Lutheran Church and confirmed at Faith Lutheran Church in Fond du Lac, WI. He graduated from Winnebago Lutheran Academy where he met the love of his life, Kathleen (Tabbert) Ruch. He was drafted into the US Army and, much to his dismay, was honorably discharged due to a high school football injury that had not healed properly. He used this challenging time of his life to fuel his patriotism. He held a special place in his heart for the many friends and family members that offered their service for our country. He returned home and later married Kathy on July 12, 1969 at St Peter’s Lutheran Church in Eldorado, WI. He spent much of his career as an insurance salesman and financial advisor for Aid Association for Lutherans, which later became Thrivent Financial. He looked forward to his retirement years to when he could volunteer his time and talents. He traveled to Russia and Haiti with WELS Kingdom workers and helped build churches in Arizona, Colorado and Wisconsin with Builders for Christ. He gained many cherished relationships and a new appreciation for the Lord’s blessings he had been given. He loved spending time with his 13 grandchildren and traveled to many softball, football, soccer, baseball, robotic, musical, graduation and any other event that they were in. He enjoyed finding a good bargain and hunting for treasures at antique stores. He learned the art of growing garlic and quickly became known as “Mr. Garlic” at the Waupun Farmer’s Market; his children and grandchildren plan to continue this venture. He had a deep love for music (something he passed on to his children) and was a shining star on the karaoke machine. Most importantly, Rueben was sure of the promise of Heaven and we all have the comfort of knowing he is in the arms of his loving Savior. He was ready, and so are we. He is survived by his wife of 50 years, Kathleen, and their dog Mutt-Z. His children and grandchildren Heidi (Ryan) Kohlmetz and their children Megan (Noah) Strasser, Macy and Jared; Heather (Lou) Vadala and their children Matt, Sophia, Isaac and Frank; Benjamin (Teresa) Ruch and their children Brady (fiancé Kelsey Rahn) and Charles; Theodore (Stephanie) Ruch and their children Aiden, Landon, Henry and Avery. His siblings: Shirley Gedlinske, Richard (Mary) Ruch, Norman (Joanne) Ruch and Hugh (Jim Edwards) Ruch His in-Laws Kathleen (Don) Ruch; Cary and Sharon Eilertson; Nancy (Don Charneski) Rudey; Bill and Kay Tabbert; Greg (fiancé Pam Giese) Tabbert; John and Beth Hettwer He is preceded in death by his parents, Rueben Sr and Marjorie Ruch; his in-laws, Lyle and Eunice Tabbert; sister Marilyn and her husband Jim Koester; brother, Donald Ruch His brothers-in-Law Robert Rudey and David Gedlinske. His infant grandson, Geno Vadala, who he has been waiting 14 years to wrap in his arms. Due to the current situation with the Corona Virus, a small, immediate family committal service was held at Rosendale Cemetery on May 8, 2020. A celebration of his life will be scheduled later this summer when restrictions have been lifted. In lieu of flowers, we ask that you please consider a donation to one of these organizations – Builders for Christ or Jesus Cares Ministries. Cards for the family may be sent to Kurki Funeral Chapel 31 E Division St, Fond du Lac, WI 54935 Surely your goodness and love will follow me all the days of my life, and I will dwell in the house of the LORD forever. Psalm 23:6

Rueben W. Ruch Jr. passed away at his home on April 30, 2020. He was born at St Agnes Hospital on March 17, 1949 to Rueben Sr. and Marjorie (Krueger) Ruch. He was baptized at St Peter&#8217;s Lutheran Church and confirmed at Faith Lutheran Church... View Obituary & Service Information

The family of Rueben W. Ruch Jr. created this Life Tributes page to make it easy to share your memories.

Send flowers to the Ruch family.