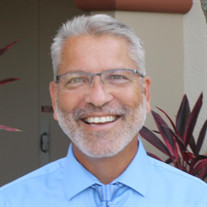 Thomas Roland Welch, 59, of Fond du Lac, WI, passed away at home on September 5, 2021, after a short battle with lung cancer. Tom was born on August 24, 1962, to Roland and Barbara Welch of Arenzville, IL. He was baptized at Trinity Lutheran Church on September 9, 1962, and later confirmed in the Lutheran faith in May of 1976. He attended Michigan Lutheran Seminary and went on to graduate from Flushing High School in 1980. He attended Delta College from 1980 to 1981 and then attended Dr. Martin Luther College in New Ulm, MN, where he would meet his wife, Pam, and many lifelong friends. He graduated from Dr. Martin Luther College in 1985 with his bachelor's degree in Education. He earned his first master’s degree from Eastern Michigan University in Curriculum and Education with electives in counseling, which ignited his passion of counseling and mentoring students. He continued to pursue this passion by obtaining another master’s degree from the University of Wisconsin - Oshkosh in Counseling. Tom and Pam wed on December 28, 1984, and were married for 36 years. They would go on to have three children: Mandi M. Welch of Fond du Lac, WI, Kayla E. Smith (husband Jimmy Smith) of Appleton, WI, Tommy W. Welch (wife Grace Welch) of Lowell, WI. Tom also had 9 grandchildren: Daniel Gamez (12), Braelynn Smith (12), Landon Gamez (10), Keaton Smith (9), Finley Smith (6), Roland Welch (3), Linus Welch (2), Hank Smith (3 months) and was proudly awaiting his 9th grandchild, expected in the coming weeks. After graduating from Dr. Martin Luther College, he received his first divine call and would serve at St. Paul in Livonia, MI, from 1986 - 1996. In 1996, Tom then accepted another call and he and his family relocated to Appleton, WI, where he served as a teacher and the Guidance Counselor at Fox Valley Lutheran High School until 2012. In 2012, with Tom's children grown and beginning to set roots of their own, Tom accepted his third call to Doral, FL, where he and Pam spent the next 8 years at Divine Savior Academy. He served here from 2012 – 2020. Finally, last year, Tom accepted a call back to Wisconsin to serve at Winnebago Lutheran Academy of Fond du Lac, WI. He was thrilled to be able to continue his ministry while being closer to his children and grandchildren. Tom was an active guy who loved fishing, hunting and being outdoors, often finding himself in comical, unfortunate events that only he could retell with a humorous spin. If you were fortunate enough to know Tom, you likely heard many of those stories and laughed alongside of him. He enjoyed taking his grandkids fishing and loved them dearly. He lived for telling jokes and making others laugh, but above all else, he loved his Savior. Tom was proud to share his faith with others, every single day of his life and incorporated that love for Jesus in everything he did from his teaching, to his marriage, to his parenting and grand-parenting. He loved his wife and family immensely. Tom is preceded in death by his father, Roland Welch, brother-in-law, David Latty, nephew, Marty Rase, niece, Lydia Welch and niece, Emily Welch. He is survived by his wife and children, mother, Barbara Welch, brothers Marty (Sandy) Welch, Rick (Joyce) Welch, Bill (Amy) Welch, Mick (Becky) Welch, sisters Mary (Bill) Hildebrand, Leanne (Randy) Rase and Jenny (Carl) Heinz, in-laws, many nieces and nephews, and friends that he loved like family. VISITATION: Friends may call from 3:00 – 7:00 PM, on Friday, September 10, 2021, and from 9:00 – 11:00 AM on Saturday, September 11, 2021, at St. Peter’s Ev. Lutheran Church, 1600 South Main Street, Fond du Lac. SERVICE: Funeral Services will be held at 11:00 AM, on Saturday, September 11, 2021, at St. Peter’s Ev. Lutheran Church, with Rev. James Borgwardt officiating. Cremation will follow the services. As a final act of service to his Savior, Tom requested that Memorials would be gifted to Winnebago Lutheran Academy.

Thomas Roland Welch, 59, of Fond du Lac, WI, passed away at home on September 5, 2021, after a short battle with lung cancer. Tom was born on August 24, 1962, to Roland and Barbara Welch of Arenzville, IL. He was baptized at Trinity Lutheran... View Obituary & Service Information

The family of Thomas Roland Welch created this Life Tributes page to make it easy to share your memories.

Send flowers to the Welch family.