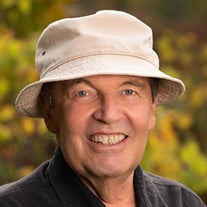 Tom D. Supple, 73, of Fond du Lac, WI., passed away on November 21, 2021, after a courageous two-year battle with metastatic melanoma with his daughter and son-in-law by his side. Tom was born November 13, 1948 in Fond du Lac, Wisconsin to the late Fred & Helen Supple (Stubbs). Tom graduated from L.P. Goodrich High School in 1967. After that he served in the United States Air Force from 1968 until 1972. Tom served tours in the United States and overseas in Taiwan during the Vietnam Era. He was a C-130 Hercules jet engine mechanic. After his honorable discharge from the military, he was self-employed as a dairy farmer until 1997. After that, he moved to Tomahawk, WI., and worked until his retirement as a welder with Northern Stainless Steel in 2014. After retirement, he enjoyed spending his winters in Florida and his summers at his cottage in Manitowish Waters, WI. At the cottage he enjoyed the quiet life of fishing, golfing, watching movies and spending time with family and friends. In his earlier years he also enjoyed hunting. Tom was proud to be a Veteran of the United States Air Force and was extremely grateful and honored to be able to participate in the Honor Flight Mission 54 just this past August. Tom is survived by his daughter Kim (Ken) Krug and Ken’s children Caden, Keegan and Kloey of Fond du Lac, WI.; brother’s Robert Supple of Loveland, CO., and James (Patti) Supple of Fond du Lac, WI.; nephews Matt (Jenny) Supple, David (Tammy) Supple, Steven (Emily) Supple, Michael Supple; Uncle Larry (Georgene) Stubbs; cousin’s Gerritt Oberbeck, Lee (Phyllis) Munson, Jack & Mary Hobbs and Linda Hobbs; and his former wife Patricia Miller, Henderson, NV. He also leaves behind many other relatives and dear friends. Tom was preceded in death by his son, Mark J. Supple; his parents, Fred & Helen Supple; his maternal and paternal grandparents, along with other aunts and uncles. We would like to extend a special thank you to the staff at Agnesian Cancer Center, especially Dr. Jones and his nurse Mary, along with all the caring and compassionate staff at Hospice Home of Hope for the amazing care given to Tom during this difficult time. VISITATION will be held from 10:00 – 11:30 AM, December 4, 2021 at Ledgeview Memorial Park, N6250 County Trunk K, Fond du Lac, WI. SERVICE: Memorial funeral services will be held at 11:30 AM, and Military Rites graveside to follow. Memorials may be directed to the family of Tom D. Supple.

Tom D. Supple, 73, of Fond du Lac, WI., passed away on November 21, 2021, after a courageous two-year battle with metastatic melanoma with his daughter and son-in-law by his side. Tom was born November 13, 1948 in Fond du Lac, Wisconsin to the... View Obituary & Service Information

The family of Tom D. Supple created this Life Tributes page to make it easy to share your memories.

Send flowers to the Supple family.