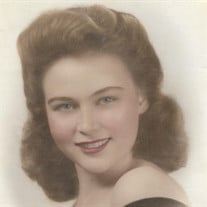 Vivian May (Leden) Holmes, 95, of Fond du Lac, Wisconsin passed away peacefully, at home surrounded by family on January 28, 2021. Born May 4, 1925 in Rockford, Illinois, she was the daughter of Winifred (Leden) Wood, and Gordon Leden. On September 12, 1944, she married the love of her life, Eldon Holmes, in Rockford, Illinois. The couple started a family and farmed there until 1960 when they moved their family to Rosendale, Wisconsin where they owned and operated a dairy farm until Eldon passed away in 1973. Vivian “Doddie” had the patience of a saint, well remembered for her nurturing and gentle spirit. She and Eldon raised nine children; survived by four daughters; Jill Frederick of Fond du Lac, Janet McCall of Bellingham, WA, Jean (Ken) Polkoski of Wild Rose, Jacqueline (George) Mengel of Hartland, five sons; Jay (Emeline) of the Philippines, Jon of Fond du Lac, Joel (Bonnie) of North Fond du Lac, James of Fond du Lac, and Jeff (Jackie) of Oconomowoc. She left behind twenty grandchildren, one expressed, “what an amazing lady, she lived a life full of love and kindness, she had a gentle heart, simply the best grandma in the world.” She was also survived by twenty-three great-grandchildren and two great-great-grandchildren who often blessed her with laughter and hugs. Vivian is predeceased by her husband Eldon Holmes (1973), grandson Justin Holmes, granddaughter-in-law Melanie Holmes, great-granddaughter Dixie Holmes, mother Winifred Wood, father Gordon Leden, and brother Jack Leden. She believed, "for by grace are ye saved through faith; and that not of yourselves; it is the gift of God: not of works, lest any man should boast." She is a member of St. Paul's Ev. Lutheran Church, in North Fond du Lac. The family would like to extend their sincere gratitude to Jill Frederick (daughter) and Jon Holmes (son) for the exceptional loving care they gave at home, and to Hospice Hope for their compassionate and gentle assistance at home during her last few weeks. The memorial service will be held at 12 Noon on Wednesday, February 3, 2021 at St. Paul’s Ev. Lutheran Church, 1010 Adams Avenue, North Fond du Lac with Pastor Michael Kampman officiating. Interment will take place at a later date at Owen Center Cemetery, in Rockford, Illinois.

Vivian May (Leden) Holmes, 95, of Fond du Lac, Wisconsin passed away peacefully, at home surrounded by family on January 28, 2021. Born May 4, 1925 in Rockford, Illinois, she was the daughter of Winifred (Leden) Wood, and Gordon Leden. On September... View Obituary & Service Information

The family of Vivian May Holmes created this Life Tributes page to make it easy to share your memories.

Send flowers to the Holmes family.